tl;dr Shouty is an entertainment website and the name of a character in a comic strip and books.

Shouty lives in a world where objects are personified, plants have personalities and even cockroaches have family albums. If you know him from the books, you also know he’s dealt with his fair share of bad habits! As I introduce the characters in the strip, I will update this section with their bios below. 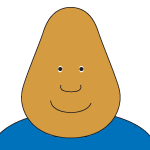 Sometimes he shows up plump in the comics, and sometimes he’s more slender. Like some of us, he yo-yo’s. Shouty is a front-end web developer. He lives and works remotely in the basement apartment of his sister’s duplex. 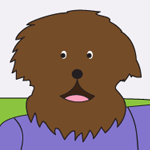 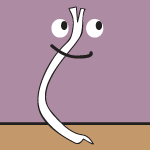 Shema is a dog hair. She claims she has been around since Ancient Egypt. She pops up where and when you least expect. She won’t say what breed she came from; we can only imagine. She always has Shouty’s best interest in mind and sees things from a different perspective. 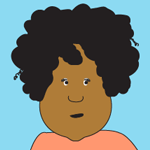 Merlington is Shouty’s older sister. They live in the same duplex. She has one son, Cousin. 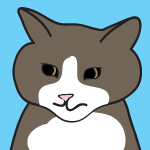 Shouty’s cat. Named after a childhood game because of her feet.

My name is Seon Ricks and I created Shouty my junior year of high school. Shouty debuted the fall of 1991 and was short-lived in a student newspaper. I only produced five or six strips in the course of a year, addressing topics like procrastination, positive thinking, and homophobia.

Some people were upset with the views I expressed in the anti-homophobic comic, and an authority figure reprimanded it in an op-ed piece. A newspaper poll also revealed readers thought the comics could use some major improvements. As a result of these criticisms, I basically pulled a Homer Simpson and stopped making the comics.

Although I left Shouty behind in high schoool, I still thought of him from time to time. I knew he had more to say, and I knew one day I would come back to help him say it.

In the original comics, Shouty’s head was squash-shaped, but over time I became looser in how I drew him and his head took on the shape of an eggplant or a pear. Here’s what Midwest Book Review had to say about it:

“Although Shouty has a faintly alien cone-head-like appearance, this trait is somehow endearing.” 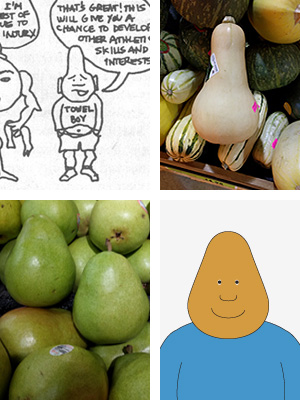 This was not intentional, but reflects the wonderful relation Shouty’s head shape has had to organic produce since his inception! The top row is how he looked in 1991, and the bottom shows him today. Copyright © 1991 – 2021.

What hasn’t changed since the original Shouty, is his spirit. He is the same lovable guy who wants to do better, be better, and though he does fail at times, he keeps trying. A procrastinator, a joker, a friend.

Shouty’s first book from the Life of Shouty Series, Good Habits, came out in 2010. The second book, Food & Fitness, came out in 2011. As an adult I struggled to maintain a healthy weight and fitness level. This book was written to inspire those important goals. Both of these books have lesson plans because I originally launched Shouty for children. When I was actively selling them at conferences and fairs across Georgia, I could tell kids instantly took to him. More often than not though, I’d hear a parent exclaim, “This isn’t for kids! This is for me!”

Consequently, Shouty is no longer aimed at the children’s market moving forward. May he freely land in any heart!

By day, I work as a web manager, and by night, I design, develop, draw, and write everything on Shouty. I grew up in the wonderfully diverse Hyde Park-Kenwood community in Chicago. The youngest of two, I have an older brother to whom I credit my love of storytelling and film. In third grade I saw Caddyshack and I decided I would be a comedian because I adored Rodney Dangerfield and also felt like I got “no respect.” In fact, I used to say my name rhymes with “peon,” which reflected how I felt as a child and young adult. Now, I say my name rhymes with “neon,” which also reflects how I feel-–bright, and electric! And that’s how I came up with the pseudonym NeonSeon.

Like Shouty, I’m still trying to do better, and be better! 😀

If you are interested in the Life of Shouty book series for ages 8 and up please visit the Shouty Shop to learn more.